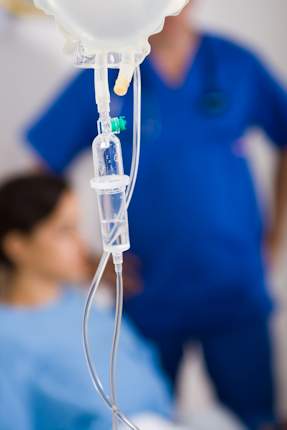 The specific therapy for the treatment of Alpha-1-related lung disease is augmentation therapy – also called replacement therapy. Augmentation therapy is the use of alpha-1 antitrypsin protein (AAT) from the blood plasma of healthy human donors to increase the alpha-1 levels circulating in the blood and lungs of Alphas diagnosed with emphysema. The therapy is usually administered by a weekly intravenous infusion and, until other therapies become available, is considered ongoing and lifelong.

While augmentation therapy is considered the only specific therapy for Alpha-1 lung disease, the treatment plan for lung-affected people with Alpha-1 should also include the appropriate use of antibiotics, an immunization program including viral hepatitis and influenza strains, reduction or elimination of environmental risk factors, appropriate inhaled medications, an exercise program, and oxygen, if needed.

The basic goal of augmentation therapy is to increase the level of alpha-1 protein in the lungs. Alpha-1 antitrypsin protects the lungs from the destructive effects of neutrophil elastase, an enzyme released by our body’s white blood cells as they respond to inflammation or infection.

The ultimate goal is to slow or stop the progression of lung destruction by replacing the deficient protein. The therapy cannot restore lost lung function — nor is it considered a cure. There is also some evidence that augmentation therapy can reduce the frequency and severity of pulmonary exacerbations (flare-ups of lung disease) and it appears to be an effective treatment for the Alpha-1 related skin disease, Necrotizing Panniculitis.

The augmentation therapy product currently approved for use in Canada is Prolastin-C from Grifols Canada, Ltd.  Prolastin has been marketed since 1988 and has an excellent safety record.

Augmentation infusions are typically given by healthcare professionals in the home, at a physician’s office, outpatient infusion center or other medical facility.

In some research studies conducted since the introduction of augmentation therapy, the benefits identified were primarily seen in certain groups of people. In these studies, the most dramatic effects were seen in those people whose lung function fell in the mid-range of severity.

Some members of the healthcare community have used these results incorrectly, to suggest that only those with moderate lung disease should receive augmentation therapy. However, because augmentation therapy is considered preventive rather than curative – it puts the brakes on lung destruction rather than reversing it – it seems logical to begin therapy as soon as possible after Alpha-1 lung disease has been detected, especially if the lung disease is progressing in spite of eliminating risk factors such as smoking.

Before beginning augmentation therapy, a patient should be tested for IgA deficiency, a hereditary condition that makes potentially severe allergic reactions to plasma products more likely.

AlphaNet Canada recommends that immunization against both Hepatitis A and B be considered for all Alphas to reduce the risk of liver injury. Vaccination entails a series of three injections, generally administered over six months. Augmentation therapy can be started prior to receiving the hepatitis vaccine or whether or not the vaccine is administered.

Are there any side effects?

Alphas receiving augmentation therapy have reported a variety of side effects, although the vast majority never have any significant problems. The most common side effect is a sense of feeling tired or having flu-like symptoms that typically lasts for up to 24 hours after an infusion. These symptoms can often be reduced or eliminated by slowing the rate of infusion. Some Alphas have symptoms that seem like mild allergic reactions: rash or hives, itching, tightness in the chest, dyspnea, and/or wheezing. Many of them can continue receiving augmentation therapy if they take an antihistamine, such as Benadryl, before their infusions. Rarely, side effects are severe enough to cause an Alpha to stop augmentation therapy entirely.